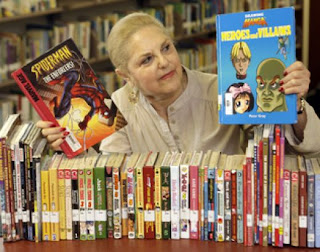 I enjoyed the articles in Weiner’s book this week, especially considering my e-discussion of graphic novels last week. It is true that graphic novels have a fairly stereotypical audience; however, it is also true that as librarians we would be doing a disservice if we did not recommend graphic novels to all of our patrons. I appreciated Boyer’s mention of the groups who do not typically read graphic novels: adults, particularly senior citizens, parents who regard graphic novels as “less than,” teens who believe that only certain types of teens (geeks, nerds, however you want to name them) read graphic novels, and most importantly, librarians.

Boyer’s position that librarians should be familiar with all of the different media and materials available in the library is a valid one. This is precisely why I am taking this class. I don’t know enough about graphic works, nor am I comfortable/familiar enough with classic graphic novels or newly published and popular graphic novels to do an adequate job advising readers. Eventually, I will work at a library, and hopefully I’ll have a cadre of regular patrons who can offer suggestions on what I should read next. Until then, though, I must rely on my classmates and the internet to define my “to read” list. 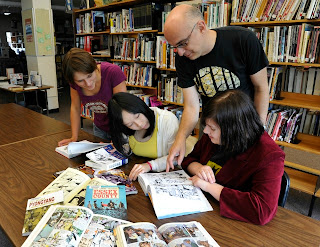 Gavigan also made some good points about using graphic novels to reach reluctant readers, particularly adolescent males, who have been shown to read significantly less than their female peers. Although the idea of using a graphic novel as a “stepping stone” into another medium has already been hotly debated in our class, I see no problem with suggesting a graphic novel to a reluctant reader if, in the librarian’s opinion, that reader will engage with or enjoy the graphic novel better than a traditional print novel. The librarian does not need to have a “hidden agenda” of encouraging the patron to read print novels; rather, the librarian is simply meeting a need for a patron, regardless of the outcome. Perhaps that patron will eventually read other types of books; perhaps s/he will continue to read exclusively from the graphic novel /comic medium.

I appreciated the idea of suggesting graphic novels alongside other books; for example, suggesting Marvel’s Oz books alongside other fantasy novels, or adding Persepolis to a list of memoirs / autobiographies. In the future, when I am responsible for book displays in the library, I will make a point to include graphic works in addition to traditional print works, the same way I would attempt to include both fiction works and non-fiction works in a display. While it may be true that graphic novel aficionados will generally prefer to read other graphic works, and print novel fans will prefer print works, it is also true that offering a variety of media and a variety of genres is part of the appeal of the public library, in addition to the benefit of being able to try something completely new without having to pay for it. Jimmy John’s may offer free smells, but the library offers free adventures, both familiar and brand-new.
Posted by Jenni Frencham at 9:00 PM

I think that we have to be careful when we recommend comics to not only recommend them to a select group of people. Comics can be useful for a wide range of people and we need to think about that when we do readers advisory. I agree with you that I would probably do something like adding _Maus_ to a list of holocaust lit and doing RA that way. This feels like the best approach to reach new patrons with the format.

I agree that on some level we do a disservice to the genre by limiting who we suggest these works too. With the retelling of so many print novels in graphic novel form (Wrinkle in Time, Tom Sawyer, Invisible Man, etc) I think there's a great opportunity for students to explore the crossover between the two, and explore a medium they had never thought of before.

I like your assessment of treating novels in the same way as trying to provide both fiction and non-fiction choices on a booklist or in a display! In my opinion, what it comes down to is that I don't think patrons need to be bombarded with any one kind of material, but I think they should have options. And I don't think options should be limited to one kind of (read, stereotyped) person. You can never really guess what a person likes or dislikes in terms of format, so why not include a little of everything and let them choose?
-Ginny

Throughout the blog posts and the readings I've seen a number of great ideas for how to engage boys, teens, in a school context, and groups that seem to be the traditional target audience for graphic novels. I wonder if any of you have experience trying to reach beyond this?

I'm not sure exactly what you're asking. Do I have experience trying to reach a variety of groups with graphic novels? No. I'm not a librarian yet, but I taught 7-12th grade English for six years, so I have had graphic novels in my classroom, although I was not given leeway to use them as a major part of my lessons.

I was glad when one of the authors emphasized the need to reach the non-target groups - older adults, women, librarians, etc. - that is why I took this class, so I could learn more about a medium that I am not very familiar with and so that I could better incorporate that medium into book talks, displays, and programming once I am a librarian.

The librarian does not need to have a “hidden agenda” of encouraging the patron to read print novels; rather, the librarian is simply meeting a need for a patron, regardless of the outcome. Perhaps that patron will eventually read other types of books; perhaps s/he will continue to read exclusively from the graphic novel /comic medium.

I think this is a really good point. Saying that graphic novels may work to promote reading to reluctant readers doesn't equal saying that they're only appropriate for that, or even that the readers have to use them to move onto something else. I agree that the essays this week were really interesting, and the ones you talked about were strong (though I'm secretly pleased you didn't praise the one I spent so much of my blog post complaining about!). And I agree, furthermore, with what everyone's saying about not limiting our GN recommendations by apparent audience. I think appeal factors should be considered over something like medium or apparent age level.