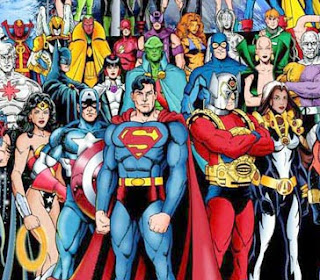 Wikipedia defines a superhero as “a character possessing ‘extraordinary or superhuman powers’” who uses those powers to fight evil. Some of the more famous superheroes will have a standard set of supervillians they fight; these supervillians may be beaten, only to return later for another attempt at beating the superhero. A superhero story follows a fairly standard plot: the superhero lives incognito, working a regular job, until some big, scary, bad thing happens and the hero is called upon to save the day. The hero and the villain have a battle of epic proportions, usually involving a lot of damage to buildings and city infrastructure, and the villain is ultimately defeated by the hero, who eventually resumes his average appearance and his ordinary job.

Because of this standard plot, superhero comics could almost be considered genre fiction, similar to romances, science fiction, or mysteries. The stock characters are standard, the plot is predictable, but none of those things take away from the comics’ popularity. In fact, some readers may gravitate to comics precisely because they are predictable, the same way some library patrons check out a stack of mysteries every time they come to the library. Those who don’t read genre fiction may find the books to be too similar to one another to be enjoyable, but the huge readership of genre fiction proves that its popularity is far from over. 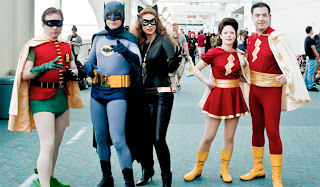 The same goes for superhero comics. It is comforting to know that no matter how scary things become in the story, or how strong the villain is, the superhero will come through in the end; good will triumph and evil will be defeated. This may be why some characters – such as Spiderman – have endured for as long as they have.

Marvel has an online “create your own superhero” program that kids would probably love to play with. There are lots of options to choose from as far as what your superhero will look like or what kinds of weapons he/she will have. I played with it for a little bit and was able to create my own superhero. There’s even a print option, so you could print out your superhero and color in his/her picture or imagine adventures that he/she would go on and villains he/she would fight. 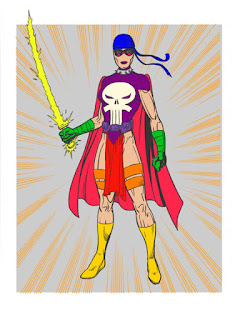 I also discovered a rather unfortunate list of superheroes. It’s supposed to be some sort of catch-all list of all the superheroes and villains in the comic book universe; however, it includes some characters that I wouldn’t consider superheroes or villians, such as the Disney characters Donald Duck and Mickey Mouse. Neither of those characters has any superhuman characteristics or fights evil; I’m not sure why they were included on the list.

I also took one of the inevitable “which superhero are you” quizzes and discovered that, for some reason, I am most like Superman. Except without the spandex. Probably many people enjoy imagining themselves as superheroes (or villains), doing great things with super powers. Perhaps that is part of the appeal of superhero comics; for just a few moments, as we read, we can imagine that we are more than the sum of our parts. 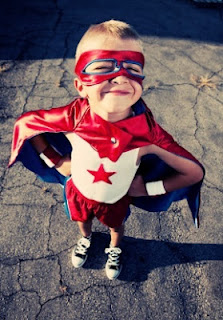 Appropriately for the week, I appear to be Spiderman. I bet it was the push-up bra question that tilted the balance. You never know what those decisive life moments are going to be.

That important issue out of the way, as a committed genre fan, I think it's also probably true that superhero comics get deeper and more varied as you become more familiar with them. From the outside, they may all look the same--because of the superficial tropes--but there's probably greater diversity on the inside. This isn't really my area, but I'm guessing that people respond to Superman, Batman, and Spiderman for different reasons. As Spiderman, I should know.