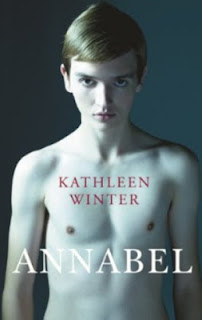 When Wayne was born, he had what doctors call "ambiguous genitalia," that is, he is an intersex person. His parents chose to allow the doctors to operate on their child and then raised him as a male.  However, Wayne  feels as though he has a shadow persona named Annabel, and she is starting to exert her influence over him.

I really wanted to like this story. Wayne occasionally expresses desires for feminine things, desires that are quashed by a dad who wants a very masculine son. All of that is well and good, but this story is told in third person, so we never get inside Wayne's head. Added to that are the numerous passages describing the landscape or some history of the town where Wayne lives, and this book lost my attention. I wanted to learn about Wayne, not about Canada.
Posted by Jenni Frencham at 9:00 PM