This week for our class we were required to read Satrapi's Persepolis. Persepolis is Satrapi's memoir of growing up in Iran, which I have found intriguing because I have very little familiarity with Middle Eastern countries and customs.  I think that having graphic novels about different cultures is a great way to present information that people might otherwise be interested in or exposed to.  Although things are improving, there is a dearth of children's and young adult works featuring characters from the Middle East, and in our increasingly global community, this is to our detriment. 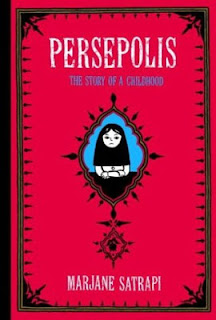 My first foray into graphic biographies, though, came through Art Spiegelman's Maus. Maus was my first introduction to graphic novels in general, and especially to non-manga graphic works. I taught on the island of Guam, so my students hailed from Korea, China, Japan, the Philippines, Thailand, and a host of small Pacific islands; they frequently brought manga to class and flew through it so fast I wished I had a manga version of our grammar textbook.  But these works were all in Japanese (or Chinese, or Korean, etc.), so I had little to no exposure to graphic novels of any other variety. 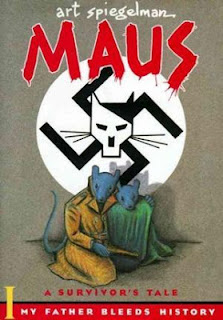 Then I found out about Maus and how controversial it was and how wonderful some people said it was, so I ordered a copy.  I'm not a history buff by any means, but the second world war does interest me, so it was easy enough to step into the world of Maus. I believe, though, that I became a bit overwhelmed by the combination of words, pictures, and difficult subject matter.  I enjoyed the book and added it to my classroom shelf, but I didn't pick up another graphic novel for quite some time. 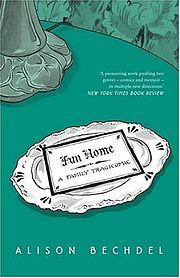 My other experience in graphic biographies or autobiographies has come through Alison Bechdel's Fun Home. I was required to read this book for a class last semester, and I was greatly surprised when I went to Barnes & Noble to purchase it, only to have the clerk retrieve the book from the biography/memoir shelf, not the graphic novel/comics shelf.  I enjoyed most of the Fun Home story, aside from the literary references that made my English-teacher self feel like a complete dunce. I could easily see how Bechdel, who is famous for her comic strip Dykes to Watch Out For, would choose to write her autobiography in graphic novel form.

It makes sense to me that libraries choose to shelve serial graphic novels in a separate section, but I wonder whether it would make more sense for graphic biographies and autobiographies to be shelved with the other biographies. Would this promote reading across a variety of media for patrons, or merely create frustration for those who prefer graphic works and wish for them to be placed separate from the rest of the collection? After reading about libraries that are "genrefying" their collections or doing away with the Dewey decimal system altogether, I wonder if it would be easier to shelve graphic works according to their genre instead of their medium.  Any thoughts?
Posted by Jenni Frencham at 9:00 PM

I agree that GN should be shelved by genre rather than by medium. It's interesting that you bring up the Funhouse purchasing experience, because I found the Dalai Lama GN under biography, while the Anne Frank GN was in Graphic Novels at Barnes and Noble. When I asked the person who was helping me why these were shelved in different places, he said he had no idea why and could't explain it to me.

I think i'm going to put the person who developed the cataloging system at BN on my list of people to meet before i die so I can ask them all these questions.

I have to agree with you that Superhero comics are not the same as biographies such as Anne Frank or even Fum Home, which I found this a fun to read. Another good graphic novel is Tetsu Kariya's The joy of rice, which is considered as a food and travel graphic novel that is by no means close to the genres covered in class so far.

Graphic novels is a medium, and I like your point about that it is not a genre.