Better Nate than Ever 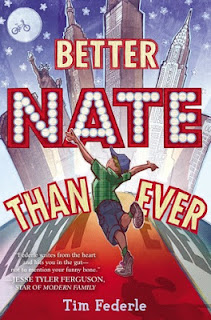 Federle, Tim. Better Nate than Ever. Simon and Schuster, 2013.

Nate wants to sneak away from his small-town life where he's always in his big brother's shadow and audition for a Broadway musical. His friend helps him get out of town, and once he arrives in New York City, hilarity ensues.

This was a cute story. I liked Nate as a character and felt sorry for him living in a small town where he was teased for being gay, even though he admitted himself that he wasn't sure what/whom he liked. I liked watching Nick navigate a big city by himself; I was glad to see some things get resolved in his family toward the end of the book.

And the thing I liked most was the fact that Nate didn't necessarily get the part he tried out for, so this book didn't have the Glee-esque ending I had expected. This story was cute and fun and definitely worth reading.
Posted by Jenni Frencham at 9:00 PM