Confessions of a Teenage Hermaphrodite 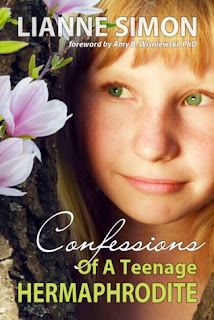 Meh. I wanted this book to be good. There are so few YA books about LGBTQIA (especially BTQIA) teens, I was glad to find one about an intersex person. Jamie/Jameson has been raised as a boy, but she feels that she is a girl, and she wants to live her life as the princess she feels she is. Her dad, though, is insistent that she is a boy, going so far as to invent rules for her to live by and whipping her as he would a son.

She's 16. She's away at college. She starts living as a girl. Dad gets mad. She's 18 - still living as a girl and still not at home. She wants to marry and adopt a couple of orphans, but her dad still thinks she needs to come home and go into some kind of gender therapy and become a boy. Then everything gets resolved and she lives happily ever after.

Like I said, I wanted this book to be good. But the narration switches from first person to third person frequently, so I never felt like I was truly inside Jamie's head. And I got SO frustrated at her insistence on obeying her parents even when she was an adult and not even living with them - she knew she was a girl, the doctor agreed she was a girl, so why did she keep trying to be a boy for her dad? Argh.  And her family was sort of religious, but not really, so I was confused when they started talking about Bible verses just randomly.  Having spent a considerable amount of time in a strict religious near-cult, I know what that kind of environment is like, and this book didn't paint that picture quite right. I was unconvinced.

I guess I wanted to be in Jamie's head more, and I wanted her to have a backbone. Better luck next time.
Posted by Jenni Frencham at 9:00 PM