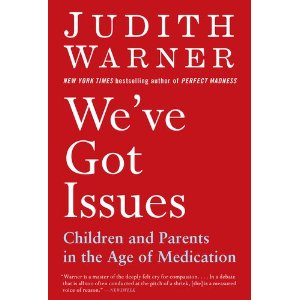 I picked up this book thinking, "Wow, a book about how these crazy helicopter parents and frazzled teachers are over-medicating kids for things that should be normal, like the 7th grade boy who can't sit still and people think he needs Ritalin.  Great."  That's exactly what the author was expecting to write about as well - parents who choose to medicate their children instead of disciplining them or who medicate to create designer lives for children who absolutely must get into the best schools.  In essence, giving medication to kids who don't really need it.

What she found, however, was a disconnect between reality and the hearsay that has propagated the idea that "all kids are on medication."  They aren't.  Warner discusses the idea that most kids actually aren't on medication, that more kids are on medication now than in the past because more diagnoses are available for children and more medications have been made safe for them, and she illustrates her points with stories of parents who have tried everything for their kids and are only medicating them as a last resort.  Not only that, but there are still scores of children who may need medication and aren't getting it, simply because their parents don't have the resources or the patience to fight against a system that assumes low-income children misbehave or receive low grades because they are just "bad."

This was an interesting book that forced me to look at this topic from a different viewpoint.  It also drove home the point that a few news headlines or stories on the internet can rapidly change public opinion, even if those stories don't represent the status quo.
Posted by Jenni Frencham at 12:00 AM