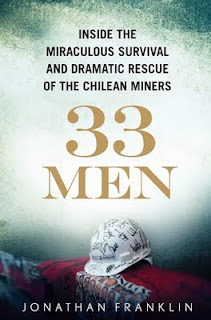 I admit it: I don't pay much attention to world events.  After six years at a school where television was not allowed and six more years in a place where I could not afford television or internet in my home, I simply got used to living with my head in the sand.  But even I could not miss the news when the 33 miners were buried under tons of rock and then miraculously rescued ten weeks later.

Franklin was one of the few journalists allowed an inside look at the rescue operation and the goings-on with the miners, and he details much of their journey beneath and back out of the ground in this book.  It's definitely worth the trip to the library.
Posted by Jenni Frencham at 12:00 AM