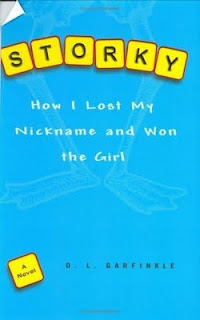 Michael has been called Storky for as long as he can remember.  He has also been friends with Gina for as long as he can remember, and he keeps hoping the friendship will develop into something more.  When he starts high school and attempts to lose his nickname and win his girl's heart, he discovers that his two goals are more difficult to reach than he initially imagined.

Let me say at the outset that there are many things about this book that I like.  I love that Michael plays Scrabble in his spare time.  I think his volunteer visits to the nursing home, where he develops a friendship with one of the residents, are really neat.  I love that he learns to stand up for himself and that he finally realizes that the idea "No doubt the problem is with you" is not always true.  All of that is great, and large portions of this book are hilarious and entertaining.  However, this is a book written from the perspective of a teenage boy, and as such, it contains some crude language and discussions of topics that I just don't think needed to be in the story at all.  Because of that, I cannot wholeheartedly recommend this particular book.  Read it if you will, but read with caution.
Posted by Jenni Frencham at 12:00 AM