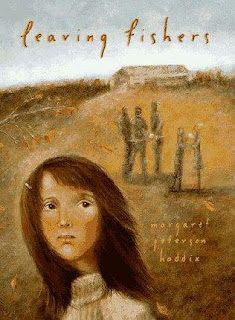 Dorry has just moved to Indianapolis from a small town in Ohio.  She is new at school and hasn't found a group to hang out with yet. When she is invited to eat with some classmates at lunch one day, she is so excited to finally be accepted and wanted.  Later, she finds out that these classmates are all part of a religious group called the Fishers.  She attends a few Fisher events and is so excited to discover love, acceptance, and happiness.  She accepts the Fishers' message of faith without hesitation and plunges into their work with enthusiasm.

However, Dorry soon finds that this group is requiring more and more commitment from her, from getting up early to pray for two hours each morning to giving all of her college savings to the group.  Any resistance on her part is explained away as her sin or her possible lack of salvation.  Dorry is beginning to doubt the decision she has made, but it is too late to walk away from the group?

This book was an interesting read for me.  I could see many parallels between the actions of the Fishers and a group I used to be associated with, and I could understand Dorry's confusions and the frustrations of her family members as they watched her sink deeper and deeper into this cult.  I am glad that she decided to leave in the end, and that she was able to begin her process of healing.
Posted by Jenni Frencham at 12:00 AM

Um, freaky. On about a hundred different levels.

Yeah, it sure is. Do you feel like this author was following your family around or something?