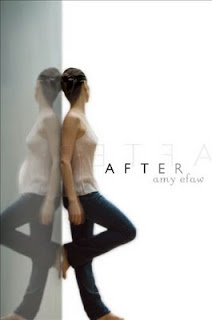 Is it possible that an athletic, responsible, straight-A student could be pregnant without knowing she was pregnant?  The police visit Devon's home one day as they are canvassing her neighborhood, looking for information about a baby that had been found, alive, in a trash can behind Devon's apartment complex.  Devon's mother assures the officers that Devon is staying home from school due to illness, a very unusual situation for Devon.  But when the officers question Devon and she nearly passes out, they discover the secret no one could have imagined: Devon is the mother of the Dumpster baby.  Devon is sent to the hospital and then the juvenile detention center while the adults in her life try to determine whether this was a premeditated murder or just a scared teen's reaction to the impossible.

This story also fits into the category of "books about girls who don't want to be like their mother."  I was intrigued by Devon's story, especially as it is told from her point of view, and I was very interested to watch the court proceedings and the ways that the professionals were able to explain how Devon could have been in denial about her pregnancy and how the people around her shared that denial with her for nine months.  I applauded Devon's decisions toward the end of the novel as she decided to accept responsibility for her actions.  This was an excellently written story and definitely worth reading.
Posted by Jenni Frencham at 12:00 AM