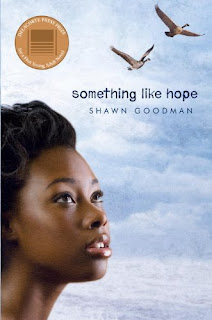 Shavonne is in juvenile detention and is rapidly approaching her eighteenth birthday.  She is hoping to be released on her birthday and to take custody of her three-year old daughter.  She wants to get on with her life and put the past behind her.  But she has a lot of work to do before she can get there, and the other girls at the detention center aren't making things easy for her. It's difficult for Shavonne to feel any hope when she is surrounded by so much despair.

This was an interesting look into the juvenile detention system, as well as the mind of a teen who has been incarcerated. I didn't enjoy this book the same way I enjoy other books, but it was an interesting read.  Unfortunately, the language choices of the characters are less than stellar, so I can't really recommend this book for classroom use or for anyone's personal library.  I was impressed with Shavonne and her decision to let her daughter be adopted by her foster parent, as Shavonne realized that she would not be able to give her daughter the life she wanted her to have, and she really wanted to stop the cycle of abuse. This book was rather depressing, unfortunately.
Posted by Jenni Frencham at 12:00 AM