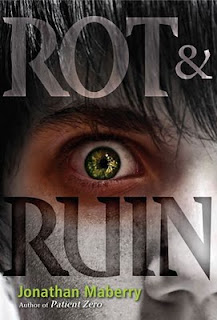 Benny is about to turn fifteen.  At fifteen he has to find a job or his rations will be cut off.  The last thing Benny wants to do is join his brother Tom in the zombie killing business, but it turns out to be Benny's only option.  Tom takes Benny with him into the land beyond the protective fence, and Benny soon learns that killing zombies isn't as easy or as boring as he originally thought.  And one of the other bounty hunters is collecting orphans for the Zombie Games.  Tom and Benny have got to locate the game arena and rescue the kids before it's too late.

Okay, so this is a zombie story.  Already some of you are rolling your eyes that I even stooped to read this book.  But this isn't an ordinary zombie book.  Really.  The zombies aren't the focus in this book; the focus is on civilization and the hope of the future generation to change things and to go beyond simply surviving to thriving in a post-apocalyptic world.

I was surprisingly impressed with this book, and it managed to hold my interest all the way to the end.  I won't be adding it to my personal library any time soon, but it was worth checking out of the library.
Posted by Jenni Frencham at 12:00 AM