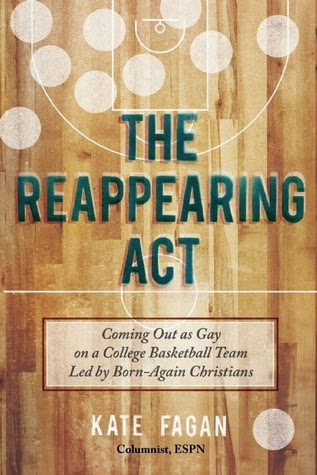 Kate Fagan’s memoir recounts her life on the University of Colorado’s women’s basketball team. Though not from a religious family, Fagan aligned herself with the evangelical Christians on her team, attending Bible studies and worship services and attempting to convince others to repent. However, Fagan soon realized that she was a lesbian, and she found her new-found faith to be in conflict with her newly-discovered orientation. This memoir describes her struggles to reconcile her beliefs and her orientation and the effect of those choices on her relationship with her teammates.

This is an unusual memoir, not because of Fagan’s struggle with her beliefs and her orientation, but rather because Fagan was not raised in a religious home. Rather than growing up with internalized homophobia, as many religious persons do, Fagan chose to spend time with evangelical Christians during college because they were part of her basketball team. Although she recounts many occasions where she attended Bible studies or prayed or worshiped with others, Fagan never states that she had a conversion experience. In the language of the evangelical Christians whom she befriended, she was never “saved” or “born again.” So her struggle with her orientation focused more on how her teammates would react, rather than how God would react. Also, although she did, in fact, come out to a couple of teammates, there was never a big “coming out” experience where she admitted to the entire team that she was a lesbian and had to deal with the ramifications. Fagan herself states that she has chosen, as she posits many others in college sports do, to keep her orientation to herself and a few close friends. In spite of the somewhat misleading title, this book will be popular among college basketball fans and would be a good addition to a public library’s collection.

Recommended for: basketball fans, teens and adults
Overall Rating: 3/5 stars
Posted by Jenni Frencham at 12:00 AM