Zen and the Art of Faking It 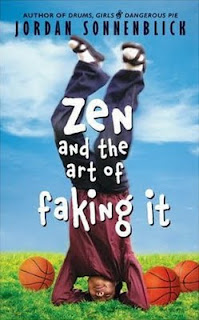 Sonnenblick, Jordan. Zen and the Art of Faking It.  New York: Scholastic, 2007.

San Lee has moved once again and once again is starting at a new school.  There are benefits to this: his new classmates don't know his dad is in prison or that his dad has cheated his way across the continent. However, his classmates also don't know anything about San himself, so San decides to invent a new persona once again.  San's new "self" is a Zen Buddhist, and San himself has some serious studying to do if he is going to be a proper Buddhist.  But what will his classmates say when they discover that San, adopted from China when he was a small child, is not the next Zen master?

This book was fun.  I can relate to San's identity issues, as well as his choice to try on a new persona whenever he arrives in a new location. I am glad that his lies caught up with him in the end and that he chose, finally, to tell the truth, both to those around him and to himself.
Posted by Jenni Frencham at 12:00 AM