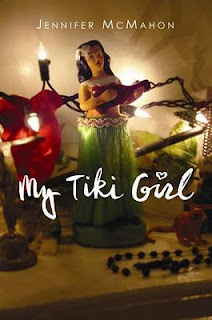 Two years ago Maggie's life was irrevocably changed.  A car accident shattered Maggie's leg and took the life of her mother.  Maggie spent most of the year in the hospital and then recovering at home.  Once a straight-A student and heavily involved in drama, Maggie's not sure who she is anymore.  Her friends and classmates don't know who she is, either, and Maggie is feeling very alone.

Enter Dahlia.  Dahlia lives with her mentally ill mother in the not-so-nice part of town.  Maggie soon finds herself spending most of her time at Dahlia's house.  But soon Maggie's relationship with Dahlia turns romantic, and Dahlia's mother, whom Maggie thought to be a cool person, kicks Maggie out of the house while screaming "abomination!" at her over and over again.  Soon the too-big secret is out and Maggie and Dahlia are facing teasing at school and stony silences at home.  Maggie must sort through her feelings and discover what is truly important to her.

Again, it intrigued me that the only characters who were against homosexuality in this story were Maggie's mostly-absent father (still grieving the loss of his wife), Dahlia's mentally ill mother (taken away to a state home as soon as she's discovered to be off her medication), and Maggie's less-than-mature classmates.  None of the good characters take any issue with Maggie and Dahlia's relationship. This was an interesting book, in that it addressed abusive homes, death of parents, terrible accidents, teasing and bullying, and relationships all in one fell swoop.
Posted by Jenni Frencham at 12:00 AM