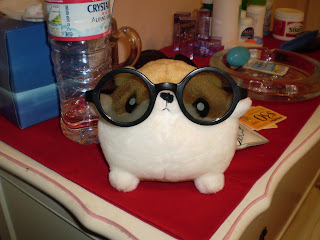 ﻿
So, Jenni, what was it like living in San Francisco for a year?
I absolutely loved it.  San Francisco is a great city.  There are tons of things to do, the library is huge, there are beautiful parks and beaches and lots of coffee shops and the bus can take you anywhere you want to go. The people are friendly and relaxed and it's never, ever boring.

What would you say was the highlight of your San Francisco experience?
Wow, I have to pick just one thing? I think the most exciting part of being in San Francisco was the people.  I got to work with some very nice people at all three of my jobs.  I also met some great people at church and was able to worship and serve together with them.  At my bus stop I never failed to run into a few interesting street people.  If I had had my own apartment and could balance my "with interesting people" and "alone, away from interesting people" time, I might have been convinced to stay.

Why are you leaving San Francisco now, anyway?
Well, first, it's very expensive to live here.  I don't have my own place, and if I were to stay, I'd need my own place.  Second, and kind of tied to the first reason, I don't have a decent job.  I mean, I have a good job, but not one that affords me the independence of my own apartment.  In order to get a better job, I need a college degree, so I'm going back to school.

Would you ever consider returning to San Francisco?
Absolutely! After I have a decent job and if my loans are paid off so I can afford living here, I'd love to be back in the city.  As I said, it's a great place to live: beautiful and interesting and friendly.

Is there anything you wish you'd done while you were here, something you won't have time for before you leave?
Well, I didn't explore nearly as much of the city as I'd have liked to.  There's so much to see and do here, I feel like I barely scratched the surface.  And a short drive away from the city leads to so many other neat things, too. But the one thing I am sorry I never did is I never walked all the way across the Golden Gate Bridge.  I made it to the first tower, but my sprained ankle wouldn't allow me to go any further.

That's unfortunate.  Hopefully the bridge will still be here if you come back to visit.  You've done quite a bit of reading and studying while you were here, even though you weren't in school. What lessons have you learned during your time in San Francisco?
I have learned a lot from being here and being around so many different kinds of people.  The two big things I have learned are that, first, everyone has a story.  Every single person has lived a life that I have not lived, and they have experiences that I don't know about.  I try to keep that in mind when I have a grouchy boss or a customer who is acting entitled and getting on my nerves.  I don't know what kind of day they've had and I don't know what they're going through. Sometimes I wish I could wear a shirt that says, "I'm having a rotten day. Please be patient." I try to remember to extend that same patience to those around me.  Knowing that other people have back stories has also made me a good listener.  Sometimes people just need someone to talk to - they don't want answers or great solutions to their problems, they just need validation that someone else cares about what they're going through.

That sounds like a great thing to learn.  What was the second thing?
That I don't have the corner on the market of the truth.  One of the neat things about being in San Francisco is that I got to play around with different ideas, I got to look at things from other perspectives.  And while there are some things that I still believe and think are fundamentally important, other things just aren't that vital anymore. In fact, in some cases I have changed my mind because I saw what "the other side thinks" and I have come to the conclusion that they are right and I was wrong.  But that doesn't mean necessarily that now I can say I have the corner on the market of the truth - I might still be wrong.  But God's grace is big enough to cover all of our human frailties, and I know that He loves me in spite of my mistakes.

God's grace is truly amazing. For most of your life now you have been involved in an extremely conservative church group.  This was the first year you were out on your own, so to speak.  How has that been?
It's been wonderful.  At first it was really scary and overwhelming.  The first week at my church here in San Francisco I was kind of in shock.  It was quite different from what I was used to.  Joining a small group was great for me; I got to discuss things with other intelligent, educated people who love Jesus and might look at things differently from the way I've been taught.  The biggest thing I learned is that it's so much more important to love those around us than to make sure they know what we stand against.  So many people only know the church as a place that is against abortion, against gay marriage, against teaching evolution in public schools, against rock music, etc. etc. They hear all these negative messages, and then they ignore the most important message which is, "God loves you! He loves you regardless of your opinion on all those issues. Issues are not the main thing. God's love is the main thing."

So was your sister justified in her concerns that you would become a tattooed, pot-smoking hippie?
In a word, no.  No tattoos. No pot. No hippiness. Even if I talk about God's love a lot. I want to round up all those people who have been pushed away from church, apologize to them for their hurts, and bring them back to Jesus. Because He really does love them.

Well, it sounds like you have an exciting future ahead of you.  I wish you all the best as you head off to grad school.
Thank you.  And if you're ever in my neck of the woods again, feel free to stop by for coffee.
Posted by Jenni Frencham at 12:00 AM