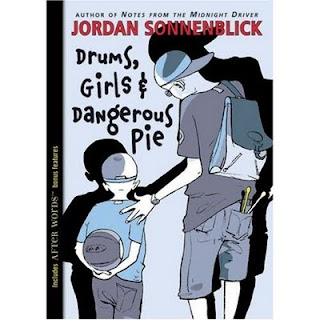 I read After Ever After several months ago and enjoyed it immensely.  Imagine my delight when I found another book by the same author and with the same characters. In this story, Jeffrey's older brother Steven is in eighth grade.  He is enjoying school, getting good grades, learning to play the drums, and everything is fine until his five-year old brother Jeffrey is diangosed with leukemia.  Steven's life takes a back seat as his parents focus on Jeffrey's treatment and recovery.  Soon Steven is attempting to survive eighth grade on his own, and he is failing miserably.  Only once he admits to his teachers and classmates that his brother has cancer does he find the help he needs and find a way to help his brother as well.

This was an excellent story, and I will admit it was easy for me to read because I knew from the sequels that Jeffrey survives his cancer. It was also a good reminder to me that sometimes people will "drop out of life" not because they have given up but because there's so much going on that they don't know what else to do.   I was also very impressed with the actions of Steven's classmates and fellow band members in this book.  If you have a classroom library, Sonnenblick needs to be on your shelf.
Posted by Jenni Frencham at 12:00 AM