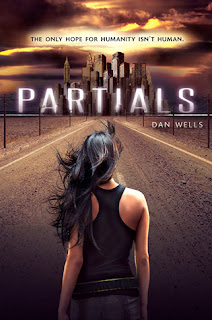 The human race has been all but eradicated by the disease RM, a disease which appeared during the war with the Partials, genetically engineered super humans who were designed as soldiers. The remaining humans live on Long Island, but there is a problem: every child born since the war has died within days because it becomes infected with RM. The humans need to find a way to save their race by saving their children, but even with every woman of child-bearing age giving birth as often as possible, they are no closer to a cure.  Will they ever find a way for the babies to survive while there's still people around to care for them?

This was an interesting and fast-paced science fiction read, very similar to Divergent, Inhuman, and other post-apocalyptic literature. I enjoyed the twists in the story, although I am content to be finished with this story line now that I've read the first book (there are at least three others in the series). This book would be very popular among my students who enjoy dystopian lit.