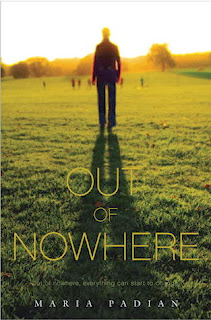 Tom is a soccer star at his school, but soon he is overshadowed by a group of boys from Somalia. They are part of a "secondary immigration," a group of people who immigrated to the United States and then moved again when they wanted to live near better schools and neighborhoods. Tom's community is divided; some want to help the new neighbors, and some would rather they went somewhere else. Tom soon realizes that it's hard to hate someone once you know their story, and he fights for his friends' rights to play on the soccer team.

I have far too few sports books in my library, especially sports-themed books that also tell a second story, so I was glad to see this one in my collection. I am also glad for the immigrant story told here, and for the way readers can watch Tom and his family react to the immigrant situation. In spite of not generally enjoying sports books, I found it difficult to put this particular book down.

Recommended for: teens, tweens, fans of sports
Red Flags: none
Overall Rating: 4/5 stars
Posted by Jenni Frencham at 12:00 AM