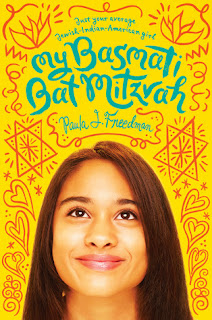 Tara Feinstein is preparing for her bat mitzvah.  She's trying to decide what she believes, in addition to trying to honor both her Jewish and her Indian heritage.  Meanwhile, she's not sure if her best friend Ben likes her as a friend or is interested in something more.

This was a typical chick-lit story, focusing on a lot of small struggles instead of some major plot point. Tara isn't sure what all she believes, and she's concerned about making promises through her bat mitzvah or committing to a belief system that she doesn't ascribe to.  She gets in trouble with her friends, watches her family interact and react to each other, and in the end decides that it's okay to live with the questions she has about her faith and her heritage. I enjoyed reading about both the Jewish and Indian cultures through this book, and I know it will be popular in my library.

Recommended for: tweens, especially girls
Red Flags: the girls get arrested for shoplifting; one of Tara's friends has a disorder where she pulls out her hair
Overall Rating:3/5 stars
Posted by Jenni Frencham at 12:00 AM