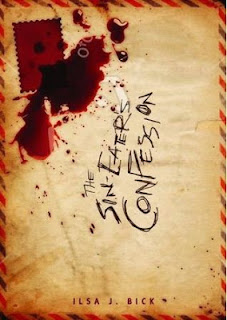 Ben is in the army, and he thinks he's going to die on his next mission, so he's taking time to confess everything before he heads out.  When Ben was in high school, Jimmy was beaten to death because some people suspected he might be gay.  Ben saw what happened and never told; since then he has felt responsible for Jimmy's death.

I didn't really like this book.  Ben's mother has been running his life, which is not an atypical storyline for a young adult novel, but Ben doesn't have that epiphany where he takes his life back and starts making his own decisions.  Also, he's obsessed with telling the reader, as well as anyone else who will listen, that he is. not. gay.  Perhaps he's deeply closeted, but if so, then he's still closeted at the end of the book.  And the whole church coffee shop and religious musical group and homophobic pastor thing is weird, too, especially since Ben's family isn't religious. This book rambles a bit, like a confession would, but it's not very engaging. I didn't like any of the characters, and I didn't get to know Jimmy well enough to do anything but feel a bit sorry for him.  Overall, this book felt like Absolute Brightness, but without the heart.