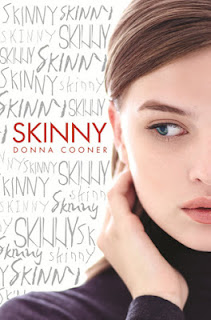 Ever Davies has a voice inside her head, and it tells her that she's worthless, hopeless, an elephant, a freak. Ever weighs over 300 pounds and has tried every diet on the planet, to no avail. Finally, Ever decides to undergo gastric bypass surgery in order to lose weight and make the boy of her dreams notice her.  She works hard to lose her extra weight, loses that awful voice in her head, and realizes that the best person in her life has been there the whole time and has loved her no matter what her weight.

This book had a lot going on.  First, there's Ever's weight issues.  Second, there's Ever's family issues - she's in a blended family and is jealous of her stepsiblings. Third, there's the relationship between Ever and Rat, her childhood friend. Rat has always been there for her, and Ever has been clueless to the fact that he really, really likes her. I really enjoyed watching Ever find her voice and herself and banish that awful voice in her head.  I was glad that she was able to take care of the relationships in her life.  I was sad that she seemed to do everything just to please those around her; Ever lost weight to impress a boy, not to help herself.

My biggest concern with this book is that Ever gets gastric bypass surgery surprisingly quickly and easily.  It sounds like her new doctor has no idea of her dieting history and just takes her family's word (and money) for it and lets her have this dangerous surgery when she's still a teen.  I don't think that's a very realistic portrayal of this situation, nor do I think most families would have the money to get an expensive surgery at the drop of the hat like that.

Recommended for: teens, those who work with teens, as part of a collection of books on eating disorders