Notes from the Blender 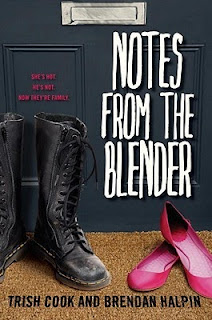 Declan's aunts run a church where Declan works on occasion.  It's in that same church that he runs into Neilly, his soon-to-be stepsister.  Neilly's mom is marrying Declan's dad, while Neilly's dad is marrying another man.  Declan, a death metal fan who spends his time playing violent video games, must learn to get along with Neilly, a popular girl who's also an accomplished gymnast.   Their two worlds collide as their parents move in together and plan to marry.

I didn't really like either of the main characters in this story, but I did enjoy watching the hijinks as their personalities clashed and then they (inevitably) learned to like each other in spite of their differences. This book is filled with teen drama: Neilly loses her boyfriend when he kisses her best friend, and then loses her best friend as well.  Declan has had a crush on Neilly for a long time and can't imagine living in the same house with her.  Neilly's dad attends Declan's aunts' church.  This book is chock full of crazy, but somehow the crazy all works.