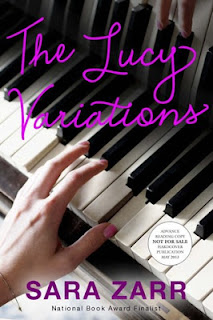 Lucy used to be a semi-famous child prodigy in piano, with her grandfather and her mother controlling her career. However, when she was forced to go to Prague for a competition and did not get a chance to say goodbye to her dying grandmother, Lucy gave up on piano and let her younger brother Gus take her place. 8 months later, Lucy is trying to decide whether she still wants to play, or if she wants to redefine herself as something else.

I was intrigued by the concept and enjoyed the mystery surrounding "why Lucy doesn't play anymore," but this book was only kind of enjoyable. Lucy is weirdly obsessed with older men, and she's uber-selfish (okay, so that is typical teen behavior, but still). I wasn't impressed with the climax of the story at all, and wished there had been more music throughout the narrative. I didn't see Lucy change as much as I'd like by the end, either. I also didn't sympathize with her as much as I would have liked, so it got to the point where I didn't really care what happened to her. I'm glad that there are more music-related books being published recently, but I'm just not a big fan of this one.

Recommended for: teens, people who enjoy classical music or play an instrument