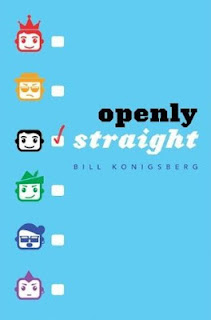 Rafe is tired of being the token gay kid.  His parents are beyond supportive, his friends at school are kind to him, but Rafe wants to be himself instead of representing the entire gay community. Also, Rafe feels like "gay" is the only thing that defines him in others' eyes.  So he decides to start over.  He convinces his parents to send him to boarding school in New England, where he doesn't come out as gay - not to his roommate, his friends, his teachers.  He doesn't tell his parents or his best friend what he's doing.  Although Rafe enjoys life as a pseudo-straight guy, he soon finds himself tangled in his web of lies and half-truths.

I enjoyed this story, both the coming-of-age and identity aspects and the fact that Rafe's parents were so supportive of him. It bothered me that Rafe was so self-centered, but he changed by the end of the book.  This book definitely should be in every library's collection of LGBTQIA works.

Recommended for: teens, adults who work with teens, people who enjoy LGBTQIA lit, as a read-alike for A Separate Peace

Red Flags: This a book full of teen boys at a boarding school, so there is drug use, alcohol, lots of foul language, some minor sex scenes between Rafe and his bromantic friend Ben.