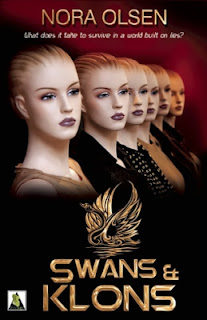 Rubric lives in the Academy, where she is dating Salmon Jo and training for the job she will eventually take.  She lives on a world populated only by women; all the men were killed off in a dreadful disease.  The women are taken care of by Klons, non-human servants who wait on them.  Outside the city, beyond the protective barriers, are the Barbarous Ones.  These women actually have men - cretinous males - living with them! Rubric has been raised to believe that this is barbaric.  But when Salmon Jo makes some interesting discoveries at the hatchery, she and Rubric embark on an adventure to find the truth, no matter the cost.

This novel reminded me a lot of Lois Lowry's The Giver, when Jonas discovers that "release" means death and decides that he must leave his society and his way of life behind. These girls lived in a very tightly controlled society, were raised without parents, and then discovered that the Barbarous Ones aren't really that barbaric after all.  I enjoyed the science fiction aspects of this story, as well as the obvious feminist slant.  And I can't really complain about an entire society peopled by lesbians.  I will be interested to see if this author writes a sequel to this novel.