The Year They Burned the Books 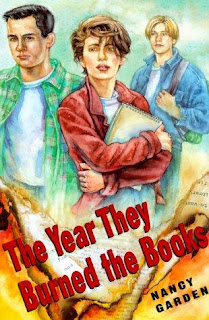 Jamie is the editor-in-chief of her school's newspaper, and early in her senior year she publishes an editorial concerning the school's choice to make condoms available in the nurse's office after school on Fridays.  Meanwhile, a concerned parent is running for the school board in the hopes that she might be able to alter the school's health curriculum to remove any mention of sex outside of marriage or homosexuality.  Things quickly spiral out of control: the faculty sponsor of the newspaper is put on administrative leave, the health textbooks are removed from the school, and everyone is up in arms.  The school newspaper staff is divided: some, like Jamie, believe that the school should educate students about all aspects of the world they're about to face; others believe that the school has a responsibility to educate students according to the conservative moral views of the majority in the community. Jamie herself is coming to terms with feelings she's never acknowledged before and wondering how she'll obtain information about homosexuality when all the library books on that topic have been locked up.

I enjoyed this story, especially once I realized it had been published shortly after I graduated from high school. I appreciated the librarian angle in this book, which reinforced the theory that libraries should be storehouses of information, not moral guides to a community. I was sad when the school board member and her minions burned books in a bonfire, even though they were books they themselves had purchased for that purpose. I also appreciated Jamie's conflict with her friend Nomi, which is the topic of another blog post. Overall, this book is very well done and definitely worth reading.