A Coat for Jesse 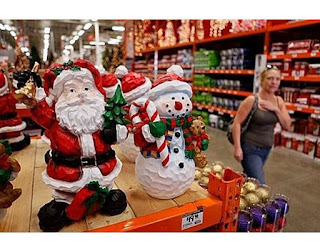 One of the unfortunate side effects of working retail is that I'm around stuff all day long.  I see stuff, I straighten stuff, I put stuff back where it belongs.  I fold stuff and return stuff and direct people to stuff and answer questions about stuff.  I see the new stuff when it comes in too early (swim suits in December, anyone?), and I see the fun, shiny stuff that goes on sale.

Spending five hours straightening the toys in the toy department or folding clothes in the clothing department has a serious effect on my priorities when I decide what to do with my paycheck.  Fortunately for me, as a grad student I don't happen to have enough extra cash for stuff.  At least, not usually.  Other things - rent, gas, groceries, cat food - take priority.

Occasionally, however, I find myself anticipating a paycheck with a bit of wiggle room.  Oh, then it's fun to think about what kind of STUFF I might possibly buy.  Should I get holiday goodies, or a pair of pants to replace the ones that disintegrated this past weekend, or some new LEGOs, or an e-book? Should I buy a treat for my cat or get the oil changed in my car or get my hair cut?  The options are endless.

I have one of those paychecks coming up this week.  I paid rent on my last paycheck, so this next one should  have a bit of room for something.  I was considering buying myself some stocking stuffers or ingredients to bake some Christmas goodies, or maybe a pair of gloves since the weather in this town is so finicky.  I was pondering the possibilities as I entered the bowling alley for my weekly league night when I noticed the angel tree.

For those of you who haven't seen one, an angel tree is a Christmas tree with very special ornaments. Instead of the usual shiny ornaments, candles, bows, etc., an angel tree bears the names of children who haven't made it onto Santa's list.  If no one does anything, they'll have nothing for Christmas.  Perhaps their parents are unemployed.  Perhaps they are in foster care. Perhaps one of their parents is in jail.  In any case, the angel tree kids list their hopes on a little card that gets placed on the tree, waiting for someone to help.

I was a bit early for bowling, so I stopped by the angel tree to see if there were any names left.  That's when I met Jesse.

I guess to say that I met him is a bit of an exaggeration.  There was no little boy by this tree.  But there was a card for a 6-year old boy named Jesse, and I was hoping he'd want some LEGOs or something I'm fairly confident I could choose for him.  I like buying toys for random kids, especially for kids that get left off Santa's list.  Usually I don't have a lot of money to do that with, but maybe I could get Jesse some toys this year.

Then I looked at what he was asking for.  Jesse is six years old, which means he's probably in first grade.  When I was in first grade, I played with Transformers and LEGOs and my bicycle and I had just discovered books and reading.  You know what Jesse wants for Christmas?

Yes, this six-year old, who could ask for anything in the world, asked for a coat.  A coat, of all things.  Forget the toys or the games or any of the "fun" presents, Jesse wants what many children complain about: clothing as a Christmas gift.

So this year I'm forgoing anything in my stocking (or my cat's stocking, for that matter), and I'm going to make do with the pants that have not yet disintegrated, and I'll just check books out of the library instead of buying any new ones.  I can't do much this Christmas, but I can make sure that a little boy named Jesse has a coat to keep him warm this winter.  And he'll probably find some LEGOs in that package, too, since everyone should have something to play with on Christmas.
Posted by Jenni Frencham at 9:00 PM

I love buying gifts for the Angel Tree. It might be one of my most favorite parts of the holiday season. Truly selfless giving to others, just like St. Nicholas. This year will be the first year we include our sons in helping pick out the presents. I want to teach them about giving too, so that they realize the joy in Christmas is really about GIVING, not opening presents.