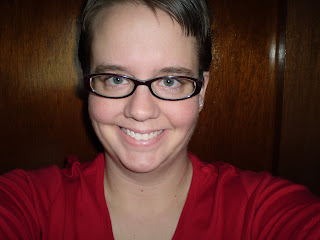 So, Jenni, you have been at graduate school for four months now.  How are classes going?
Well, my classes are done for the semester.  They weren't as hard as I thought they would be, and I think I learned a few things from the projects and other assignments I had to complete.  It was kind of interesting to be back on this side of the desk again.

That's right - this must be odd for you to be the student instead of the teacher.  Do you miss teaching?
I miss my students.  There are parts of teaching that I miss.   Some of the things - random administrative duties and some of the other required parts of my day - I don't miss at all. But I will admit that it was easier to work one job than three, even if the one job required as much work as three.

Three jobs - wow!  How in the world do you juggle all of that on top of a busy school schedule?
To quote the character Temperance Brennan from the TV show Bones: "First I do one, then the other."  Seriously, though, it's been a bit complicated to keep everything straight, or rather, to keep track of everything.

Straight, huh? This semester is also when you decided to come out to your friends and family, isn't it?
Yes.  After a lot of thought and prayer and consideration and tears, I finally did publicly come out on October 11 - National Coming Out Day.

I'm sure that was difficult. What was the hardest part about coming out?
It definitely was hard.  The hardest part, I think, was fielding all the reactions from people who do not understand or who are choosing not to understand.  I spent a lot of time in a pretty strict religious group, and most of my friends are still involved with that group.  So they can't really wrap their brains around the idea that I can love Jesus and be attracted to women at the same time.  I got more than my share of messages from them - things that probably were intended to be "Hate the sin, love the sinner" type messages, but that ended up being "Hate the sin, hate the sinner."

Did you lose contact with a lot of people after coming out?
I did. Actually, the last year and a half has been a process of losing contact with a lot of my old friends.  It's been hard and sad, and a big part of me wishes it didn't have to be that way, but just like my friends said that they couldn't just ignore my orientation and go against their convictions to be my friend, I also can't pretend to be someone I'm not just to make them happy.  It helps that I have a good support network around me, now, too.

So, who do you count as your support network?
I actually draw my support from a couple of different places.  Online, I am a part of the Gay Christian Network, which has been amazing, as many of the others in that group have also experienced difficulties in dealing with the religious beliefs of their families.  It's also a good place for me to ask the questions I can't ask anywhere else.  I'm also part of a group of former BJU students and it's been good to talk to them as well and get encouragement and support from them.

Do you draw any support from people in your community?
I'm beginning to.  It's hard when you move to a new place to try to find your spot in the community.  But I'm part of a wonderful open and affirming church where I've met people who love God and love me and for whom my orientation is a non-issue.  My church is also a safe place to ask the hard questions about my beliefs and which beliefs are important for me to keep now and which I feel I can leave by the wayside.  I'm also getting to know my fellow students in library school, as well as other members of the GLBT community here.

I heard that there's a certain person who's a SLIS student and a member of the GLBT community that you've gotten to know particularly well.
[Blushes] Why, yes, yes there is.  I never, ever imagined myself being at a place where I could act on the attractions I feel. For the longest time I squashed all of that and imagined I'd be alone and lonely forever.  Even after I came out, I didn't expect to begin dating this soon.  I'm continually amazed at how lucky I am; my girlfriend is completely wonderful and I totally don't deserve her.

Wow.  It sounds like your plate is pretty full, between classes, work, church, and dating.  Looking back at this semester, would you say your choice to come to library school was a good one?
Definitely. I wouldn't change one thing about it. It's been a busy semester and it's had its ups and downs, but it's been so worth it.

Before we go, what are your plans for this Christmas break?
I'll be working a lot - this is a busy season in the retail business. And I'm going to catch up on some reading and relaxing, things I've had to neglect a bit as the end of the semester hit and things were due in classes.  And of course, I'll be spending time with my girlfriend.  I'm glad we have this break to spend some time together before the spring semester smothers us.
Posted by Jenni Frencham at 9:00 PM