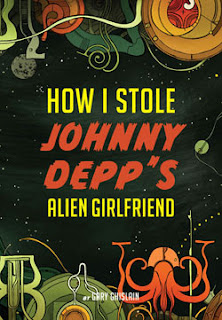 David's father is a psychologist who specializes in difficult cases.  David has been taking it all in stride, adjusting as much as he can, until he meets Zelda.  Zelda says she is 325 years old and is on a quest to find her chosen one, whom she would take back to her home world and place in a zoo.  David accompanies Zelda on her quest to find her chosen one, Johnny Depp.  Will Zelda be able to locate her chosen one before the key to her interdimensional door disappears?

I saw the title of this book and I just had to pick it up.  The book is funny and I did enjoy reading about Zelda's antics as she tracked down Johnny Depp.  Unfortunately, the book suffers from a horrid case of "slow end game."  The loosely woven plot did not wrap up at the end of the story, and I was left quite unsatisfied.
Posted by Jenni Frencham at 9:00 PM