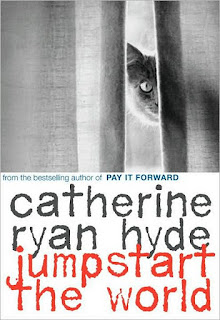 Elle has just moved into her own apartment.  At 16, she's hardly old enough to be on her own, but her mother's boyfriend forced her mom to choose between him and Elle, so Elle is given her own apartment on the other side of town.  Elle's mom pays the rent and utilities, and provides Elle with money for groceries, but to say that this arrangement has put a strain on their relationship would be an understatement.  Elle is in a new neighborhood, at a new school, and completely alone, so she is glad for the friends she finds at school and for her neighbors as well, until she discovers a secret that throws her world for a loop.

I had a really great quote here that I pulled from the book, but unfortunately Blogger decided to delete it before I could save it, and I've already removed my bookmark.  All that to say, Elle learned a lot of great lessons in this book, not the least of which being that the people we love could die at any time, so we need to treat them with as much love and care as we can.  I was also glad for Elle's choices as far as her relationship with her mom is concerned.