Of All the Stupid Things 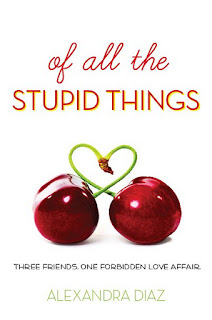 Tara, Pinkie, and Whitney have been friends forever. There couldn't be three more different people, but somehow they manage to make it work.  Then a rumor and an argument spiral out of control, and the three friends are separated, each trying to come to terms with the truth.  Tara is dealing with an absent father, a cheating boyfriend, and possibly a new girlfriend; Pinkie is still grieving her mother's death, and Whitney doesn't know what to do with herself when she discovers she is not the center of everyone's universe.

Although I will admit that both Pinkie and Whitney managed to get on my nerves throughout this story, I can understand how people who seem to be from different universes can become friends, so I won't begrudge Tara her friends. I was glad both that they weren't perfect and that they manged to work out their differences by the end of the story.  And I was especially glad for Tara's mom's reaction to Tara when she told her she was dating a girl.  Tara was able to talk to her mom honestly about how she felt about her girlfriend and how confused she felt that she had left a boyfriend for a girlfriend.  Her mom said, "So maybe you're someone who falls in love with a person, not a gender" (201).  A wise friend of mine gave me similar advice when I was struggling through coming out; she suggested that I not worry about the gender of the person I love, that labels don't really matter that much.  And I've passed that very piece of advice along to others as well; there's something to be said for being just a person and not a label.