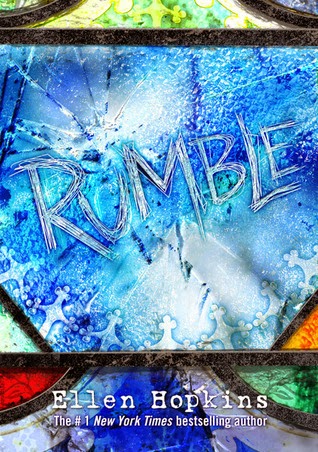 Matthew doesn't believe in god.  He hasn't since his brother committed suicide after incessant bullying by his classmates. Matthew's girlfriend is very religious, and Matthew is dealing with the overwhelming loss of his brother as well as the flak he is getting from his teachers and parents because of his vehement insistence that no god could possibly have created such a terrible world.

This book, like much of Hopkins's work, runs the gamut of difficult issues.  We have anti-gay bullying, a kid who is angry at everyone and making everyone wonder if he will bring a gun or worse to school, a girlfriend who has let her religious beliefs blind her to what is going on around her, etc. This is not an easy book to read, but books "about kids with real problems" are very popular in my school library, so as long as they are relatively free of red flags, I try to get as many of them as I can. I would describe this story as "messy," but the lives of my students are also messy, so that isn't necessarily a bad thing.