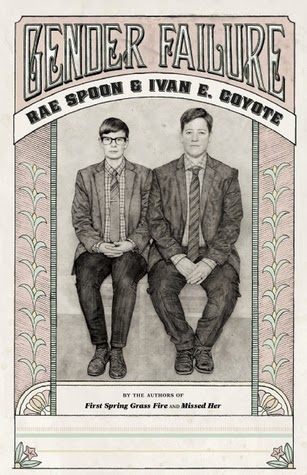 This collection of essays and personal stories is the collaborative work of Ivan E. Coyote and Rae Spoon, both performers, musicians, and writers who admit that they have “failed” at gender. While Spoon has identified as transgender in the past and has now retired their gender altogether, Coyote has chosen to identify as trans* where they used to be identified as a butch lesbian. Both Coyote and Spoon have at times felt like outsiders and are now bringing awareness to the world at large and the LGBT community about those who live off the gender grid.

In alternating chapters, this book is a collection of the authors’ essays, song lyrics, drawings, and photographs all describing the their journeys as they have traveled through and beyond the gender spectrum. The essays and stories are personal, poignant, humorous, and bittersweet. They cover a variety of topics, touching on each author’s experience with gender, growing up in Canada, the LGBT community, and other seemingly-mundane topics such as airport restrooms. This book, like the multi-media show it’s based on, demonstrates that gender isn’t a binary thing. As such, Gender Failure is a necessary addition to any LGBT special collection, and is strongly recommended for public libraries, particularly those where there is emphasis on representing diversity within the library’s collection.
Posted by Jenni Frencham at 12:00 AM