God and the Gay Christian 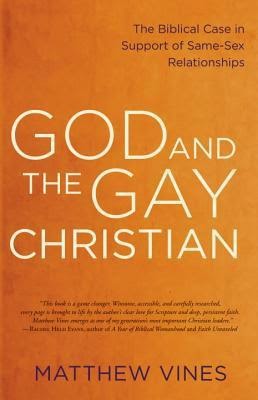 After the viral success of his video lecture on the Bible and homosexuality, Vines has continued his study of the topic and compiled his findings into a book. Starting with introductory comments and continuing through the six “clobber passages” from the Bible most commonly used to condemn same-sex relationships, Vines draws from biblical scholarship, language studies, ancient history, and other texts contemporary to biblical writings to show a different way of looking at the arguments against homosexuality. The factual information is punctuated with snippets from Vines’s own coming-out experience with his father. The final chapter highlights modern church reformers such as Kathy Baldock of Canyon Walker Connections and Justin Lee of the Gay Christian Network, as well as discussing Vines’s own work in the Reformation Project. Extensive endnotes indicate that Vines has, indeed, put much time and effort into thoroughly studying this topic. Rather than giving pat answers or simple slogans, Vines walks the reader through the historical context of the arguments against same-sex relationships and explains how the church (and the world) has viewed this issue throughout history.

An excellent academic read and companion to Lee’s Torn: Rescuing the Gospel from the Gay vs. Christian Debate and Shore’s Unfair: Christians and the LGBT Question, Vines avoids the common pitfalls of resorting to numerous “human interest” stories to prove his point and instead focuses on the logic and history behind the religious arguments against same-sex relationships. Readers who expect an in-depth look at biblical themes and passages will not be disappointed. Evangelical and other conservative Christians will appreciate Vines’s approach to the topic as well as his stance on church doctrine. Vines asserts his belief in the absolute authority of the Scriptures, and in so doing he invites those who have turned away from previous attempts at reconciliation between the two camps to look again at what the Bible itself has to say on this very controversial topic. This book would make an excellent addition to a public library’s collection in conservative communities as well as academic libraries at religious institutions.
Posted by Jenni Frencham at 12:00 AM