Dirt Bikes, Drones, and Other Ways to Fly 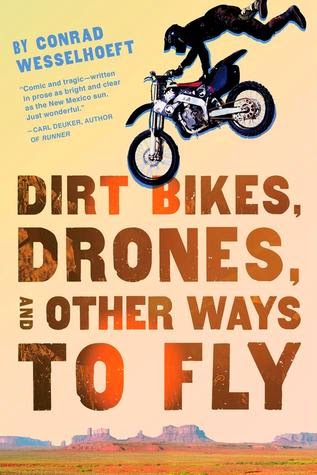 Arlo is a daredevil.  He rides his dirtbike down the highway, racing semi-trucks and leaping over hills.  He is also the #1 ranked player in the game Drone Pilot, where he flies planes to complete various missions.  His international ranking has gotten the attention of the military, who want to use him to fly real drones in war zones. Arlo doesn't want to be responsible for anyone's death, but his sister's medical bills are piling up, and he knows his family could use the money.  Arlo has to choose between what is right and what is easy.

I really enjoyed this book. Arlo is a likable character, and his stunts are never boring. Also, the descriptions of New Mexico were beautiful, and I was glad that while Arlo's sister had Huntington's, the book wasn't trying to teach everyone exactly what Huntington's is like.  I thought his decision at the end was ... interesting, to say the least.  I can't say I'd have done the same thing in his place, but I respected the journey he went on to make that decision.  All in all, this is a great book, and although I don't like to gender stereotype, I know that many of the boys in my library would LOVE to read it.

Read-Alikes: The Eye of Minds for video game aspect, Killer of Enemies for adventure, The Green Glass Sea for setting in White Sands, NM.
Posted by Jenni Frencham at 12:00 AM