Trinity: A Graphic History of the First Atomic Bomb 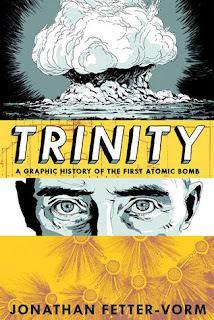 Trinity, the debut graphic book by the gifted illustrator Jonathan Fetter-Vorm, depicts in vivid detail the dramatic history of the race to build and the decision to drop the first atomic bomb. This sweeping historical narrative traces the spark of invention from the laboratories of nineteenth-century Europe to the massive industrial and scientific efforts of the Manhattan Project. Along the way, Fetter-Vorm takes special care to explain the fundamental science of nuclear reactions. With the clarity and accessibility that only a graphic book can provide, Trinity transports the reader into the core of a nuclear reaction—into the splitting atoms themselves.

This was a great read, giving lots of background information on the atomic bomb. I would pair this book with The Green Glass Sea, Under the Blood-Red Sun, and other books featuring information about the Pacific Theater of the Second World War.
Posted by Jenni Frencham at 9:00 PM