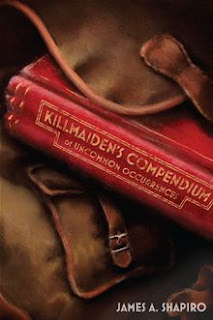 Alex Drake is a scout, hoping to become an explorer someday and follow the great tradition of explorers who are published in Killmaiden's Compendium of Uncommon Occurrences. He's already famous as the youngest scout to have an entry published in the famous book. But when Alex's father leaves on a top-secret mission and is gone for over two months, Alex knows something is wrong. He must follow his father on his mission, not knowing where he is going or what he is searching for, trusting his fate to his wits and the help of those he finds along the way.

I loved this book. It's a great adventure story, set in a world that's similar enough to Earth so that it is easy to follow along, but different enough to seem fantastical. If I hadn't had to stop to sleep in the middle, I'd have finished this book in one day. The story is great, the characters are believable, and the ending, even if it isn't surprising, is quite satisfying. I sincerely hope that a second book follows.

I would recommend this book to tweens and teens, especially those who have enjoyed adventure books like the Percy Jackson, Harry Potter, or Fablehaven series. The Compendium would make a great read-aloud book for a classroom or a "next read" for the student who has read everything else. This one is definitely worth adding to a library's or classroom's collection.

I received a complimentary copy of this book through the Goodreads First Reads program for the purposes of review.
Posted by Jenni Frencham at 9:00 PM