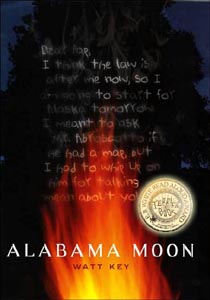 Alabama Moon has been living with his father in the wilderness.  Relying on nature alone, they avoid contact with other people, especially people from the government. Moon's father doesn't trust others.  But when Moon's father dies, the very people he has been taught not to trust come to take care of him.  Can he trust the adults in his life to do what's best for him, or would he be better off striking out on his own?
This was an interesting book.  It did not cast a giant negative light on those who distrust institutions, as I had initially thought it would.  The main character has an interesting mix of bravery, resourcefulness, and naivete that is intriguing to watch in action.  I enjoyed this story and applauded the decisions of the main characters.
Posted by Jenni Frencham at 12:00 AM