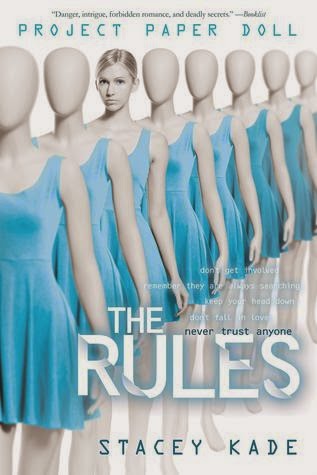 Ariane is an alien-human hybrid who was kidnapped from a research facility and has been raised as a "replacement" for her kidnapper's dead daughter. She lives a very careful life so that no one will discover the truth about her. Only one day she breaks the rules, and then she realizes everything she thought she knew was a lie.

From the cover, this looks like a good read-alike for Matched. I was expecting another typical YA dystopian series, where I would enjoy the first book and be annoyed at the others in the series, but this is actually a decent science fiction novel without falling into the Dystopian Trilogy Trap. It is a good book, and it is a YA science fiction series, but it isn't a dypstopia. I started reading this one because I thought my students would like it, but I actually enjoyed the book more than I expected. Yes, the "surprises" in the book aren't really that surprising, but they might be to the average teen reader. And the concept of an alien-human hybrid is interesting.

Recommended for: teens, fans of science fiction, fans of dystopia (even though this one isn't really a dystopia)
Red Flags: minor violence
Overall Rating: 4.5/5 stars

Read-alikes: Adaptation
Posted by Jenni Frencham at 12:00 AM