Down to the Bone 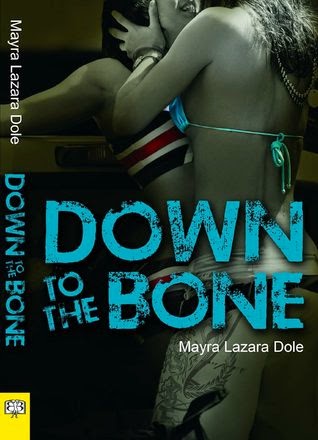 Laura gets caught reading a note on the last day of school.  The nun who runs her class decides to read it out loud, and the entire class is scandalized to discover that Laura's note was from her girlfriend.  Laura is promptly expelled from school, and once her mother discovers that Laura is unwilling to reveal the name of her girlfriend, she is also kicked out of the house. Her mother will not let her return until she has a boyfriend and is willing to name the girl who caused her to be expelled.  Devastated, Laura seeks refuge with a friend who allows her to stay as long as she needs to.   Laura attempts to reconcile with her mother, going so far as to date a boy, but eventually she must decide whose happiness is most important to her: hers or her mother's.

I was glad for the Latino focus in this book.  The setting - Miami, a Latino neighborhood and a very Catholic family - isn't one often described in books. I would love to get this book for my library.  I was also glad for the mention of a transgender character (who, unfortunately, never shows up in the book because she committed suicide off-stage) as well as Tazer, a person who identifies himself as genderqueer and often presents male although he was assigned a female gender at birth. Laura's family's reaction to her orientation is unfortunately all-too-real, even today.  As soon as I can get my hands on it, a copy of this book will be in my library.

Recommended for: teens
Red Flags: lots of homophobic slurs in both English and Spanish (there's a glossary in the back in case you want to learn how to insult GLBT people in two languages); alcohol use
Overall Rating: 5/5 stars
Posted by Jenni Frencham at 12:00 AM