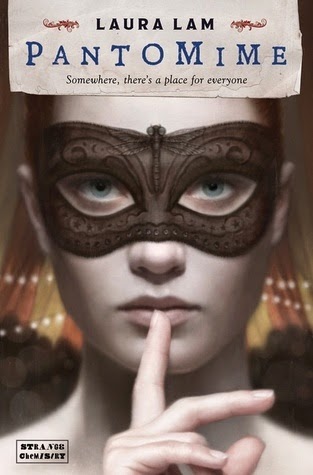 Gene (Iphigenia to her parents) lives in a land not so different from Victorian times, except that there is mysterious Penglass all around as a remnant of older times. Gene is intersex, but for the sake of simplicity I'll use female pronouns as that is how she was raised and she does not choose to change her pronouns later. Gene doesn't fit the mold of a typical female - she hates sewing and would rather be climbing trees and chasing after her brother. When Gene overhears her parents talking one night and discovers that they are going to make her get surgery to become a "real female," she decides to run away and join the circus. Literally. But how long can Gene hide the truth about herself?

This book is excellent for many different reasons. The fantasy side of the story is great - the storytelling and narration read like many other fantasy stories. The diversity in characters is also wonderful - many of the circus performers that Gene meets are gay/lesbian/bisexual, although they don't wear rainbow shirts or have fabulous parades. Gene herself is very real and is dealing with very real problems. It's pretty obvious from the end of this book that there will be a sequel, but the book stands alone well itself. Absolutely this is a must-have title for libraries that want diverse books; there are too few YA books featuring intersex characters.

Recommended for: young adults
Red Flags: Gene is nearly raped twice; both times the man stops when he discovers her unusual genitalia; there is talk of her binding her breasts; the man who runs the circus is an alcoholic who beats his wife; there is some minor violence
Overall Rating: 5/5 stars

Read-Alikes: Graceling for the fantasy and GLBT content; Etiquette & Espionage for the Victorian-esque feel, Confessions of a Teenage Hermaphrodite for another intersex character.
Posted by Jenni Frencham at 12:00 AM