Tess Masterson will Go to Prom 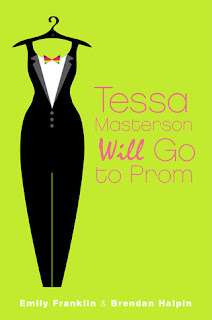 Tessa's best friend invites her to prom, using a giant marquee to display his question to the small-town world where they live. Tessa turns him down and reveals the thing she's hidden from everyone but herself: Tessa is gay. This private admission turns into a public spectacle when the townspeople protest Tessa's plans to come to prom in a tux and with a female date.

I don't want to spoil the rest of the story, so I'll stop my summary there. This book was fun and funny and adorable and had a great Jordan Sonnenblick-esque ending and I was hesitant to start another book afterward, thinking that nothing could top the amazingness I'd just read. And maybe it can't.

If you haven't read this book yet, you need to. Even if it bothers you that one of the main characters wants to go to Purdue. After all, he's just a character. :)
Posted by Jenni Frencham at 9:00 PM