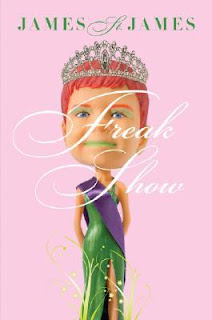 Billy Bloom has been sent to live with his father in Florida after his mother decides she's had enough of him.  Billy is gay and presents as a Kurt-esque character, although Billy might even give Kurt a run for his money.  But Florida might not be ready for Billy, and we follow him into his new school as he attempts to find his place.

I was interested in the premise of this story, and I really wanted to like it, but I could NOT get past the irritating narrative voice. Anyone who spends that much time on internal narrative and that little time on the actual events that are occurring ... argh. Too many all-caps situations, not enough of what was happening outside the protagonist's head. And I'm sure part of this was due to the fact that the protagonist didn't want to be in Florida, and so he retreated inside to survive, but nonetheless, this book just didn't do it for me.  I would likely recommend this book to Gleeks and to those who enjoy books with alternative narrative styles, like books told through texts or in script form.
Posted by Jenni Frencham at 9:00 PM