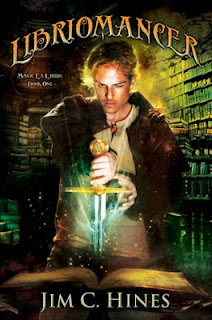 From the Goodreads page on this book: "Isaac Vainio is a Libriomancer, a member of the secret organization founded five centuries ago by Johannes Gutenberg. Libriomancers are gifted with the ability to magically reach into books and draw forth objects. When Isaac is attacked by vampires that leaked from the pages of books into our world, he barely manages to escape. To his horror he discovers that vampires have been attacking other magic-users as well, and Gutenberg has been kidnapped.


With the help of a motorcycle-riding dryad who packs a pair of oak cudgels, Isaac finds himself hunting the unknown dark power that has been manipulating humans and vampires alike. And his search will uncover dangerous secrets about Libriomancy, Gutenberg, and the history of magic."

This book warmed my geeky little heart. A libriomancer is able to reach into a book and bring out an object from the story - they do this to protect people and kill vampires or other bad guys. The libriomancer we follow in this story is a sci-fi/fantasy fan, so he's obsessed with Dr. Who and Star Wars and all the other important things. :) And he has a fire spider as a pet. And it eats Jelly Bellies. There's just so much to like about this book - all the literary and media references, the fantasty elements, the fast-paced action, the fire spider (I think I want one, but it might give my cat heartburn). If you are a bibliophile, a sci-fi fan, a librarian - you simply must read this book.
Posted by Jenni Frencham at 9:00 PM