Thorne posits that librarians have an obligation to collect web comics with the same frequency that they  collect works in other media: "A large body of work on the Web ... holds interest for library patrons. Librarians have long accepted a responsibility for seeking out and evaluating resources on the Internet for the benefit of their patrons, and for making their discoveries available in digital subject bibliographies, or pathfinders." I couldn't agree more.  I believe that librarians should collect information sources from a variety of media and be sure to include web comics or other internet sources in their pathfinders or read-alike lists, in addition to keeping lists of web comics themselves (lists that should probably be checked frequently to make sure the links are still functional and accurate).

Many new comic artists are taking advantage of the ability to self-publish via the internet, in the same way many authors choose to self-publish their novels. This allows the comic artists to gain a following and possibly seek professional publication if it is desired. Thorne mentions that this also allows the artists to avoid the "editorial control" of syndication, providing more freedom of expression for the artist.  As the web has exploded and its use has expanded from only the technologically elite to even preschoolers at the public library, so have the genres of web comics  to the point that Thorne posits that some web comics defy a specific genre classification. 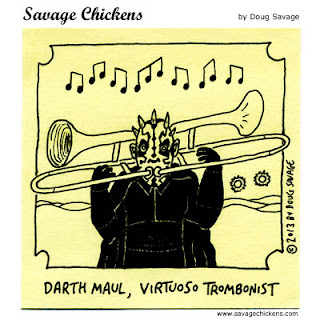 I am constantly amazed by the variety of styles employed in web comics.  One of the comics I follow regularly, Savage Chickens, consists of pen and ink chicken caricatures drawn on Post-It notes.  Some of the cartoons on this site deal with sci-fi themes such as Star Wars or Star Trek, but many of the cartoons are simply funny scenes involving the chickens or their friend Timmy Tofu.  Another comic I follow is Surviving the World, which features a man in a lab coat standing next to a blackboard. Each day there is a different message on the blackboard.  The Brick Side, a comic created by a friend of mine, contains a photo of a scene created with LEGO bricks, often embellished with thought or speech bubbles. One blog I found recently features stories about being a parent of small children and is illustrated with pictures that appear to have been drawn in the Microsoft Paint program, and the pictures are intentionally "crappy" (the author's word, not mine).

I appreciated Thorne's list of resources and clearinghouses for web comics. At this point in our class, I think it goes without saying that web comics are created for a variety of audiences and that we should recommend them as appropriate to anyone who could be interested in the subject matter. Thorne posits that "a library with any kind of a graphic novel collection should not be neglecting webcomics." Thorne is half-right.  All libraries should avoid neglecting webcomics, regardless of their graphic novel collection.
Posted by Jenni Frencham at 9:00 PM

I never really knew about webcomics until this class and I am excited to spend more time exploring them. Since you work in a library now, how do you think the best way to integrate webcomics into the collection would be? Posting a list (like booklists but for webcomics) of suggested ones by the shelf? Posting them online? How did you find out about webcomics?

I first discovered web comics because a friend found a funny site and sent it to me, and that site linked to another site, and so on. I still only follow a few sites, and I know there are many, many more out there, but I do believe they are gaining in popularity.

I personally think that web comics may be on the rise, although right not it is too early for libraries to consider making purchases. With many of the children as young as 10 years old writing HTML, it is not surprising if they are going to be interested making short comic strips as a start using Photoshop, or other software to create their comics online.

It is too early to tell how wide this popularity can get, but I would not be surprised if there is enough interest, there may be even forums, groups such as Facebook, Goodreads of it.

I agree that we should be collecting these types of sources. They are just as relevant, and popular, as their print counterparts. I find that since the artists have more freedom on the internet and can go into issues that can't be done as easily in print, that attracts many readers.

I think the point about self publishing and editing is right on spot. I see that as a huge draw in writing and drawing online. As far as the library's role in webcomics/any online source, I think it's important for us to incorporate them just as any other material type. I think it's also really neat because, as Jenni said she discovered some, it's really nice that this form does kind of snowball on itself and allows the reader to make more discoveries and kind of take ownership of their reading. Although, the consistant updating of the links and websites could be time comsuming. I think if I wanted to advertise webcomics as a readinglist, I'd do bookmarks or handouts in addition to having it on the library website.