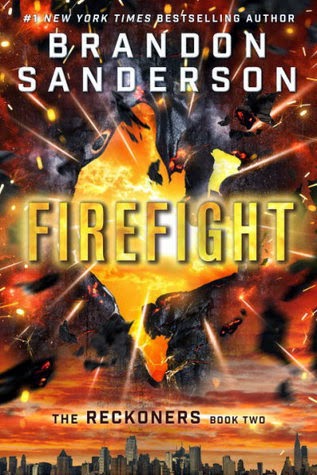 This is a sequel to Sanderson's Steelheart, and the reader returns to the Reckoners, who have now moved on to what used to be Manhattan in order to defeat Regalia, who has been sending minor Epics to harass the Reckoners in Newcago.  David is convinced that Epics can defeat the darkness within by choosing not to use their powers, and he wants to get some reformed Epics on the side of the Reckoners to help them in their battle.  Meanwhile, Prof, himself an Epic, is convinced that all Epics are the enemy and must be killed.

I listened to Steelheart on audio CD during my commute, and I really enjoyed both the story and the narrator's interpretation. I could hear that same narrator in my head as I read Firefight, and I think this would be an easy book to book talk to even reluctant teen readers and is a great read-alike for many superhero comics.

Recommended for: teens
Red Flags: violence, "fake swearing" (new words are used as profanity, and it's pretty obvious that the words are swears, but it isn't as bothersome as standard profanity since the words are next to meaningless in our world)
Overall Rating: 5/5 stars
Posted by Jenni Frencham at 12:00 AM