The Surprise Attack of Jabba the Puppett 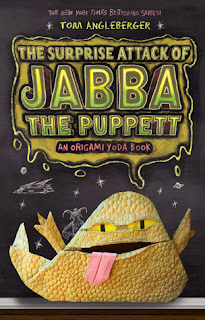 Dwight is back at McQuarrie Middle School, but things are not well. In an effort to raise standardized test scores, the school has decided to do away with all electives and extra-curriculars and to replace them with "fun" time where the kids learn the FUNdamentals of passing the tests. The kids are not happy, the teachers are not happy, and no one knows what to do, until they ask for some help from Origami Yoda. The kids begin to fight back against the tests, but it isn't until Jabba the Puppett makes an appearance that they are able to truly battle "fun" time!

This book is a great next installment in the Origami Yoda series. Like the rest of the series, I can't keep it on my shelf. My only complaint is that it has a cliffhanger ending, and I don't like cliffhangers when I don't know when I'll be able to find out the rest of the story. Other than that, this is an excellent book.