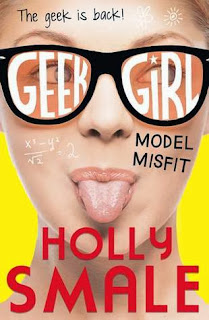 Harriet is a geek and also a model, so she is glad for the break from her normal life when she is sent to Japan for a modeling job. But when every one of her shoots is sabotaged, her boss begins to wonder if Harriet is the right girl for her campaign. Harriet has to try to navigate a culture unfamiliar to her while rescuing herself and her job from forces unknown.

This book was hilarious in spite of the fact that it's clearly a chick lit book. Harriet's grandmother is absolutely ridiculous, and between her and Harriet's agent there are enough humorous moments to offset the tension from all the modeling mishaps. I could definitely sell my 7th/8th grade girls on this book.

Recommended for: tweens and teens; fans of chick lit
Red Flags: none
Overall Rating: 4/5 stars
Posted by Jenni Frencham at 12:00 AM